Europeans’ Attitudes To Immigration From Within And Outside Europe: A Role For Perceived Welfare Impacts?

How do EU citizens view intra-EU mobility? In particular, do they see it as a contributor or a drain on their national welfare states? And do they distinguish between intra-EU mobility and migration of non-EU “Third Country Nationals”?

Free movement is a fundamental principle of the European Union. Recent polling (in the 2018 Eurobarometer) shows that free movement retains support among a large majority of EU citizens. And yet, free movement faces potential pressures from both public attitudes toward immigration and from tensions between open borders and national welfare states. On the first point, given high levels of opposition to immigration in some member states, support for free movement may depend in part on the willingness of citizens who oppose immigration in general to make an exception for their fellow EU nationals. On the second point, as our colleague Martin Ruhs has noted, free movement within the EU challenges scholars’ and observers’ claims that open immigration policies are incompatible with national welfare states, particularly those that are based on residence rather than prior contributions.

Our analysis explores to what extent European citizens distinguish between immigration from within and outside Europe, and explores whether specific concerns related to the effects of immigration on welfare and public finances play a role in these differences. This report is the first stage in a larger project that aims to explain EU citizens’ perceptions of the ‘welfare impacts’ of intra-EU mobility and non-EU immigration. As a first step, this report explores EU citizens’ attitudes toward immigration from within and outside Europe, and the links between these attitudes and public perceptions of the welfare effects of immigration.

Our analysis draws on the European Social Survey (ESS), in which over 30,000 nationals/citizens across 19 EU countries were asked whether they would allow ‘many’, ‘some’, ‘few’, or ‘no’ immigrants from within and outside Europe. Those who favoured inflows from either origin are identified as total inclusionists, while those who opposed inflows from either, as total restrictionists. People who differed in their preferred level of inflows between the two origins are identified as either Europe or outside Europe inclusionists, respectively.

The vast majority of Europeans who support relatively high levels of immigration from Europe do so as part of a general acceptance of immigrants, and are not necessarily aligned with the preference for fellow EU nationals implied in the EU’s foundational four freedoms. In both 2002 and 2014, about half of respondents supported allowing many or some immigrants irrespective of European or non-European origin.

Another four out of ten respondents supported limiting immigration to few or no immigrants, also regardless of European origin. Only approximately one in ten respondents (9% in 2002, 11% in 2014) differed in their immigration restriction preferences depending on whether immigrants from poor countries come from within or outside Europe. Among those who distinguished between European and non-European origins, a very small portion were outside Europe inclusionists (2.3% in 2002, 2.1% in 2014). While these figures are calibrated with weights to ensure they are representative nationally and comparative in terms of population size differences, generalising to the whole of the EU would require adjustments for member states that did not participate in the survey.

Cross-national comparisons of these preferences in Figure 2 suggest notable disparities across EU member states. Support for restricting immigration from both within and outside Europe was highest in Hungary (80%) and Estonia (68%). Germany (26%) and especially Sweden (9%) showed the least support for restrictions.

However, the relationship between perceived welfare impacts and support for immigration does not appear to be linked to European origins: those who believe that immigration detracts from the welfare state are about equally likely to support restrictions on immigration from within Europe as from outside Europe. Figure 3 compares the level of support for Europe-only inclusionism (left panel) versus Europe-only restrictionism (right panel) across perceived fiscal impacts.

Notes: ESS weighted statistics based on combined responses. The neither/neutral (5) category of the variable on perceived fiscal impacts has been excluded.

These findings have both encouraging and troubling news for supporters of free movement. On the positive side, our findings do not show evidence that the theoretical tension between open borders and national welfare states is registering in public opinion. While perceptions of negative impacts on welfare are associated with a desire to restrict immigration, this link is similar for attitudes toward non-European immigration. This suggests that the welfare-immigration link in public opinion is not being fuelled by the combination of free movement and access to national welfare states by mobile EU nationals. On the other hand, we see scant evidence that anti-immigration Europeans are willing to make an exception for their fellow Europeans. Continuing public support for free movement may depend on tolerance of immigration in general; for the majority of ESS respondents, support for immigration is granted or withheld generally. European origins are not sufficient, in most cases, to convert opponents of immigration to supporters. But this question will be explored in greater detail in future research by this project.

You can read the working paper here.

Scott Blinder is leading the REMINDER work package focusing on the drivers of opinions and norms. He is Assistant Professor of Political Science at UMass Amherst and previously served as Director of the Migration Observatory. He is a political scientist specialising in public opinion toward migration and its impacts on elections and policy.

Yvonni Markaki is a researcher on the REMINDER project. She previously worked with the Migration Observatory as a research officer and also assisted the Global Exchange on Migration & Diversity. She specialises in international migration and the analysis of comparative survey data. 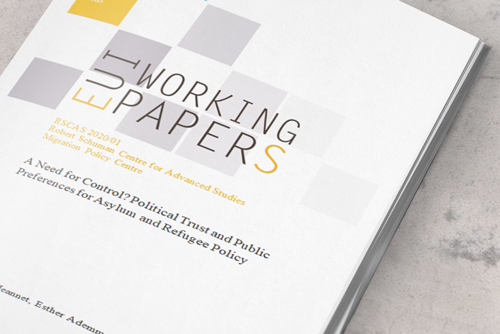 Dept. Christmas parties are a time of #joy, #love & #cheer. It also is a time to come together & be thankful. @FabienneLind, @J_Kohlenberger & I are particularly thankful for having been awarded the Dept. Research Award 2019. We're already eager to present our findings in 2020!🤗

Signup to our newsletter